Gstreamer's logging system is an incredibly powerful ally when debugging but it can sometimes be a bit daunting to dig through the massive amount of generated logs. I often find myself writing small scripts processing gst logs when debugging. Their goal is generally to automatically extract some specific information or metrics from the generated logs. Such scripts are usually quickly written and quickly disposed once I'm done with my debugging but I've been wondering how I could make them easier to write and to re-use.

gst-log-parser is an attempt to solve these two problems by providing a library parsing GStreamer logs and enabling users to easily build such tools. It's written in Rust and is shipped with a few tools that I wrote to track actual bugs in GStreamer elements and applications.

One of those tool is a buffer flow analyzer which can be used to provide various information regarding the buffers exchanged through your pipeline. It relies on logs generated by the upstream stats tracer, so no modification in GStreamer core or in plugins is required.

First step is to generate the logs, this is easily done by defining these env variables: GST_DEBUG="GST_TRACER:7" GST_DEBUG_FILE=gst.log GST_TRACERS=stats

We can then use flow for example to detect decreasing pts or dts:

Or to detect gaps of at least 100ms in the buffers flow:

It can also be used to draw graphs of the pts/dts produced by each src pad over time: 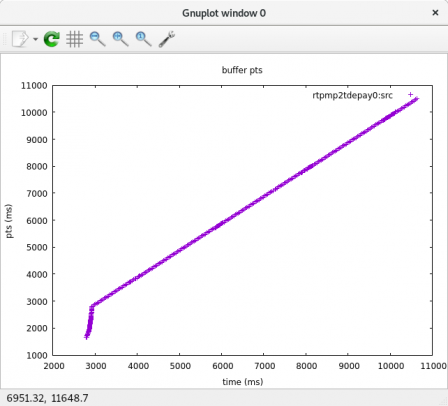 These are just a few examples of the kind of information we can extract from stats logs. I'll likely add more tools in the future and I'm happy to hear suggestions about other features that would make your life easier when debugging GStreamer.